by Eva Dölitzsch-Tatzreither
Published: Oct 25, 2019 (1 year ago)
Category
Lifestyle
Other

German Alpaka Breeders in Cape Town, AKELEI-ALPAKAS began with breeding coloured Huacaya Alpacas in 2004. When in 2005 the first Suri stallion, the black QAI LAUTARO, was imported from Chile, it initiated a new direction for breeding. As a proven homozygous stallion, he has since produced numerous first-class crias (alpaca babies) in a variety of colours with wonderfully silky Suri curls. Over the years more fine-bred alpaca stallions joined their herd and since 2008, AKELEI-ALPAKAS has been the only company in South Africa to offer the extremely rare and coveted Suri wool in addition to the finest spun Huacaya wool. The alpaca herd and product range has since grown steadily.

When Eva Dölitzsch-Tatzreither and her son Christopher took over the company in 2009, they expanded their product range to not only include fluffy alpaca wool, but also exclusive locally produced and imported alpaca fashion, hand-woven scarves, stoles and quilts- as well as 100% organic alpaca fertilizer. In October 2012 Akelei-Alpakas moved to the 11-hectare farm,  Stillwater Estate near Philadelphia, just 40 minutes North of Cape Town.

As the drought of the century hit Southern Africa in 2017, Akelei Alpakas halted heir breeding program to keep a stable and sustainable amount of alpacas. They also developed an exclusive range of jewellery, combining alpaca-felt balls with semi-precious stones under the label AFRO-ALPACA-BIJOUX which are available locally and internationally with increasing demand. 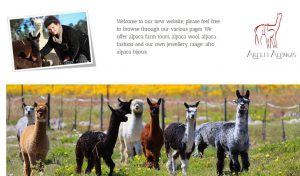 Contact Akelei-Alpakas  the German Alpaka Breeders in Cape Town, South Africa here to find out about their wool, fabrics or animals.

In case you want to change your privacy settings (e.g. issue consent or revoke an already issued consent) please click on the button below. Settings